Bordered by the sea of Cardigan Bay on one side and the Cambrian Mountains on the other, Ceredigion is an ancient Welsh kingdom founded by the 5th-century chieftain Ceredig.

There is plenty for you to do and see here.

Many take the opportunity to explore the scenery and unique coastline on walks, by bike or on horseback. There are many walks to enjoy both inland and along the Wales Coast Path.  For those who enjoy exploring by bike; there are many cycle routes and mountain biking trails to try.  However, there are also a wide range of attractions and parks for all the family.

Alternatively, take a boat trip out to see the dolphins, seals and other wildlife in Cardigan Bay; visit a heritage site; explore the towns and villages; or try your hand at a wide range of sea and land based activities. 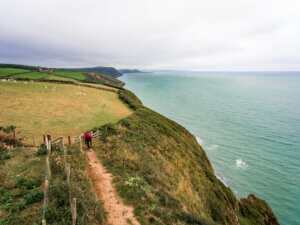 The beautiful Ceredigion coast is just waiting to be explored.  The lack of industry means Ceredigion has some of the UK’s cleanest beaches.

Cardigan Bay is a Marine Conservation Area with sites of Special Scientific Interest due to the flora and fauna, as well as the wildlife. The Ceredigion coast has miles of golden sand, award winning beaches, rocky coves, sheer cliff faces, tiny ports and harbours. The main towns are Aberystwyth, Aberaeron, New Quay, Lampeter and Cardigan.

The Coastal Path stretches for 60 miles around Cardigan Bay, with New Quay at its centre.   The Bay has an abundance of wildlife, both on shore and at sea. There are wildlife spotting trips from New Quay and Cardigan. These are a good way for you to see bottlenose dolphins, porpoises, seals and coastal birds.

Keen Anglers are often seen on the beaches at New Quay and Cei Bach, while there are opportunities to go Sea Fishing from New Quay if you prefer.  Other options in Ceredigion include coarse fishing or river fishing on the River Teifi.

Ceredigion is also a great place to try water sports including sailing, kayaking, windsurfing, surfing or coasteering. Alternatively, watch one of the Regattas that take place during the year.

THE HILLS AND COUNTRYSIDE 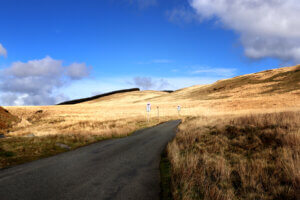 Situated on Ceredigion’s eastern border are the Cambrian Hills. These hills are the source of three rivers: the Severn, the Wye and the Teifi.

The hills contain a wealth of history in the form of Bronze Age cairns, stone circles and megaliths. There are also lead, silver and zinc mine workings, some of which date back to the Romano-Celtic period.

In the western end, is the Cistercian Strata Florida Abbey, which was founded in 1164. To the north east of the Abbey are the Teifi Pools, a series of small lakes left over after the last ice age and the source of the River Teifi.

Capel Soar Y Mynydd is often called the most remote chapel in Wales. Situated between Tregaron and Llyn Brianne, it is a Welsh Calvinist Methodist Chapel which was built in 1822 to serve the hill farmers of the remote upper valleys. The chapel today is still a site of active worship and visitors continue to make their pilgrimage to this hauntingly beautiful site.

The countryside is a working landscape of cattle and sheep farms and small market towns. There are many events through the year, including horse and pony shows and trotting races. 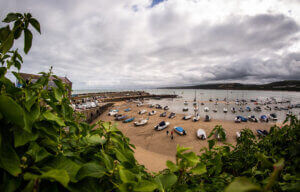 New Quay was once a thriving port, shipbuilding and fishing centre. Today it is a popular seaside resort with easy access to its beaches. It has Seaside Award winning beaches which provide watersports. The area is also renowned for frequent sightings of bottlenose dolphins and boat trips sail from the harbour to explore the Ceredigion Marine Heritage Coast.

There are plenty of restaurants and pubs in the Town and neighbouring villages. In addition, there are three fish and chip shops, a pasty shop, and a Chinese takeaway.  Alternatively, buy fresh fish from the fishmongers, or pop along to the butchers who sells meat from their farm.

You can find more pictures of New Quay here

Nearby, New Quay Honey Farm is the largest bee farm in Wales with a live bee exhibition.  The Farm also has a shop selling honey, mead and beeswax.